The Role of Motivation

This article is for leaders that want to understand how to motivate employees. 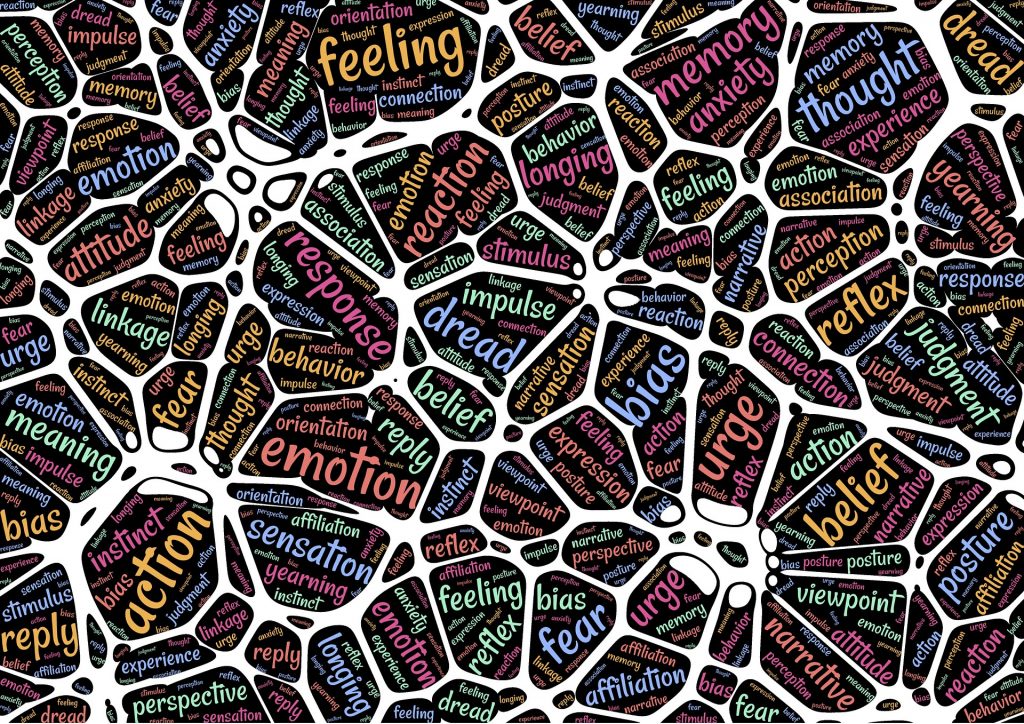 Information technology (IT) has increased the possibilities for remote collaboration significantly. IT entails the ability to work together in setups where time and space is rendered insignificant. This possibility for breaking down geographical barriers has been sieged by smaller and larger corporations worldwide. However, the lacking interactions among team members poses some challenges. One of these is the ability to lead and manage teams where physical interactions are scarce or non-existing (Geister et al., 2006).

An important property, when it comes to leading and managing digital teams is motivation: The ability to understand how a space that motivates your employees is created, and how you facilitate this environment, will generate positive results for businesses (Geister et al., 2006). Motivation is a generically fluid term of which there are many different perceptions as it largely is a subjective feeling, associated with several psychological experiences and expressions. To put this into perspective, this contribution therefore connects the term, with the theme of digital collaboration specifically motivation in digital workplaces.

Among some of the advantages of motivation is an increased productivity and reduction of costs (Gilley, et el., 2009). Talking about motivation in case of groups or teams, we can say that “Motivational processes are crucial not only for individuals but also for the performance of teams” (Geister et al., 2006: 460). The overall performance is enhanced, as collective motivation rises.
As the overall determinant of motivation is external factors, the leader’s responsibility for motivated employees is rather significant. Bearing this in mind, one might argue that the motivation you generate among your employees is the accumulation of the positive influences you are able to make as a leader. For this, we see a variety of influences which you can impose, such as generating goal orientation, create a feedback culture, and attention to differences in people, as described below.

Neurologically, the feeling can be explained as a relief of dopamine, a reward-activated hormone, which plays a central role in reward-motivated behavior (Stellar and Stellar, 1985). In this lies an attention to the human brain, and its reactions to the external environment. What causes the relief of dopamine is, of course, as subjective as any other feeling or understanding related to individual. Generally speaking, feeling motivated is associated with excitement, the urge to contribute, and interest in what one engages in. Naturally, what interests people is different, but a way to categorize the justifications people have for performing a task, motivation is divided into intrinsic or extrinsic motivation. Intrinsic motivation is when you perform an activity, because you have interest in this. Extrinsic motivation on the other hand, is when you perform an activity to achieve a separate outcome (Deci and Ryan, 2000).

In his book “Drive: The Surprising Truth About What Motivates Us”, Daniel Pink writes about three elements, which altogether motivate us. Rather than only paying attention to extrinsic motivation, such as monetary rewards, he points out the possibility to develop as an individual as key to motivate employees. (Pink, 2009). The three elements are: autonomy, which is the ability to be self-directed and direct out own lives. Businesses should address this by offering self-determination to its employees. The second is mastery: This addresses our urge to improve our skillset. Third is purpose, which means to recognise that people wish to contribute purposefully, which means that profit alone does not create great results. The core idea in Pink’s book is that stimulating extrinsic motivation alone does not work. Not to say that money will profoundly hinder motivation, moreover that mo ney alone is not a sufficient motivator (Pink, 2009).

A recent study from the Norwegian school of business (2017) shows that extrinsically motivated employees risk to burnout quickly, experience stress and anxiety as pressure increases, as well as conflicts in personal life. From this study, they found that intrinsically motivated employees performed better overall, and experienced job-satisfaction as well as more commitment (Kuvaas, et al., 2017).

How do you keep your employees motivated?

There are two key approaches leaders should be aware of, when motivating employees:

• Create goal-orientation. For this, leaders must address the differences among employees. The individuality should play a role, as to how challenges are perceived individually. Some might be intimidated by the complexity of a task, where others find motivation in mastering new skills. Ways to approach this is first: Know when to set goals. There is a line between being too general where goals are annual or bi-annual event, to micromanagement, where employees are constantly measured on a daily basis. In order to set the adequate goals, leaders must address whether the goals are attainable, and if the employees have the knowledge and tools to reach these goals (Lazenby, 2008).

• Provide feedback. Additionally, leaders should give feedback on these goals, as a follow-up on progress. This involves also a certain degree of recognition among some employees, where feedback should be given as a way to inform whether a task has been executed correctly. Some employees might have the need to get a direction for what to do, in order to obtain a goal, rather than criticism on their work. In some cases, this might work counterproductive demotivate in some cases (Lazenby, 2008).

Summing up, motivation is an important component in businesses, which effective leaders search to impose among employees, as motivated employees will contribute to corporate success, where goal-setting and feedback can be used as means for this.

In I4L we do research to improve leaders’ skills, to prepare them for the digital future.

Report on our first workshop – “Digital Leadership and Communication”

Reflections on our first workshop – “Digital Leadership and Communication”

On 8.9. 12 handpicked leaders from Danish companies met at IT University of Copenhagen to learn about the chances and challenges of digital communication for leaders.

After an introduction of the I4L project, the team members, as well as the participants, the workshop was kicked off by an inspirational keynote on “Leading Creativity in the Digital Workplace”, by Mette Kim Bohnstedt  as announced in a previous blog post. With many hands-on examples Mette illustrated how are our jobs changing, how we are bombarded with information, and how creativity occupies an important role in the new digital society.

An important aspect of the workshop, that was also pointed out by the participants, was the interactive nature of the sessions, as well as the balance between information and reflection.

In this context, amonst other things, the participants applied a framework that was developed for the workshop that allowed the leaders to critically reflect on how they communicate, adapt, listen, understand, and empathize when their communication is mediated by technology. Some of the action points mentioned, were: “working on my kindness factor when I communicate digitally”, “focus on building an atmosphere for creative thinking”, “be more inclusive towards digital workers and have more frequent communication, despite the time zone difference”.

Some of the things the participants reported to have learned from the workshop, were: “types of motivation – how I can become a better remote leader.”; “a really useful framework for continuing my work within digital transformation”, “a wealth of cases and inspiration from other participants”.

We are looking forward to working further with the participating companies of the workshop. 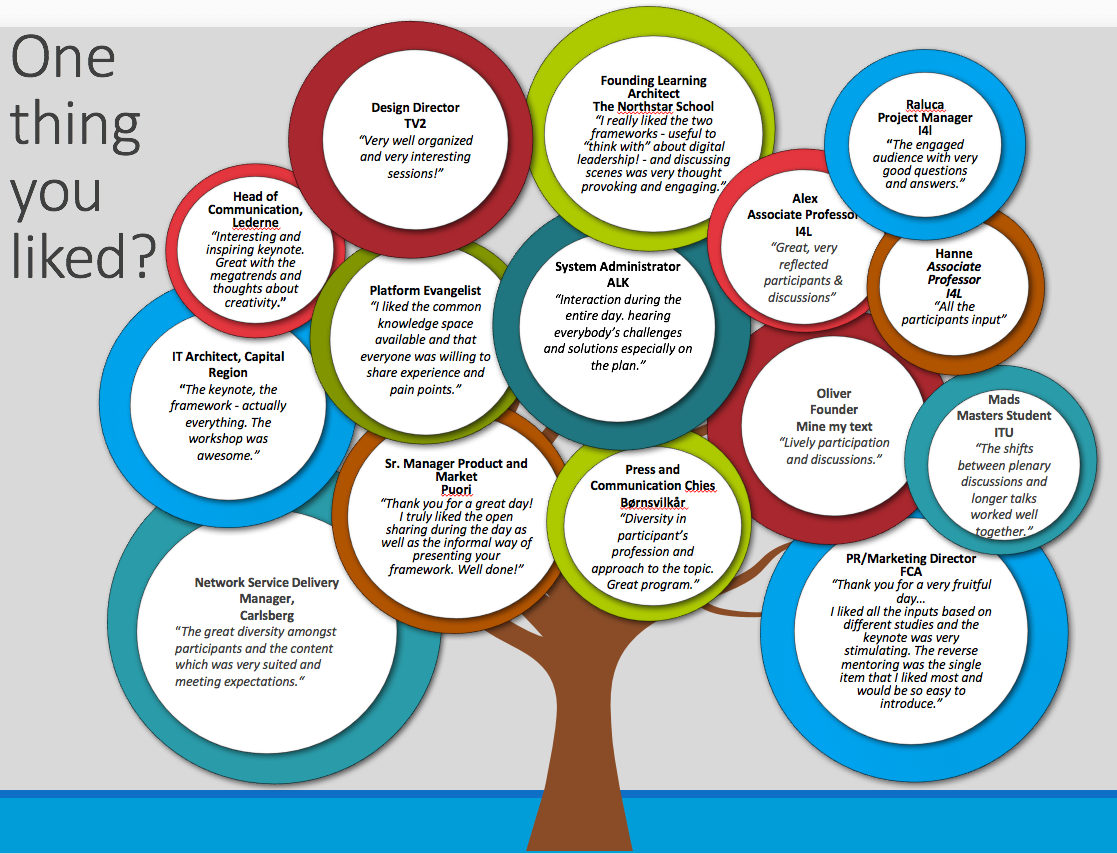